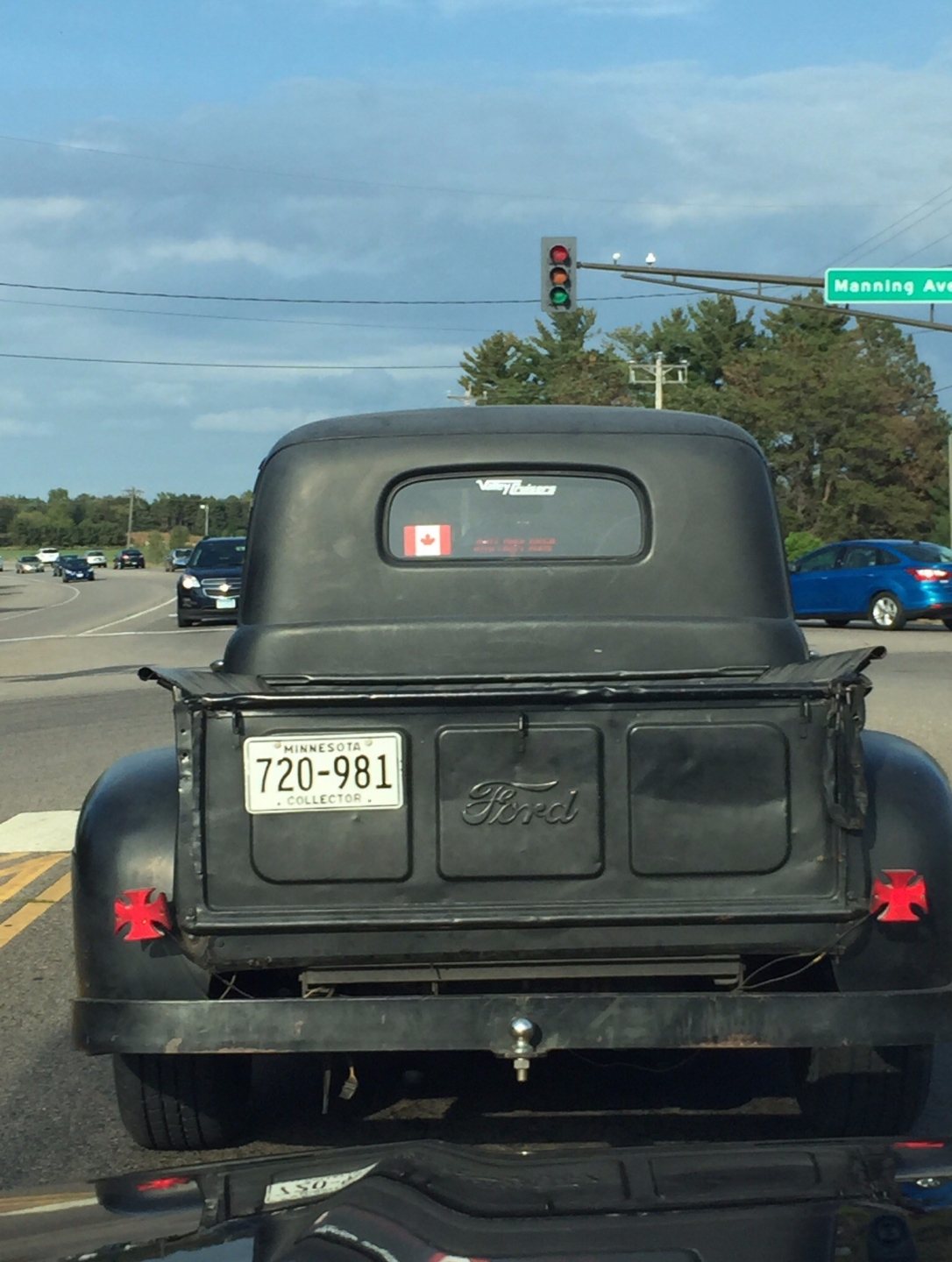 The other day I was picking up my son from football practice and had the privilege of coming behind this truck. I adore old trucks! My man loves old cars and street rods, so over the last 20+ years, I’ve had the opportunity to develop an appreciation for these beauties.

As I followed behind it, I noticed a sign in the back window. I assumed it was a “For Sale” sign, but when we stopped at the light I realized I was wrong. It read:

I busted out laughing! Then I quickly prayed the light wouldn’t change before I got a picture.

All evening that sign kept picking at my brain. It wasn’t until later that this sign’s underlying message dawned on me:

What you see on the outside doesn’t always reflect what’s on the inside.

Immediately I thought of a young lady I mentored for a season. When I met her, she was a stereotypical goth: all clad in black, dyed black hair, pale skin, heavy eye makeup, dark lipstick, piercings, tats, dog collars, and combat boots. But it was the angry set of her jaw and the distrustfulness in her eyes that drew me to her. Despite her mask of toughness and rebellion, the deep hurt from her shattered heart exposed her brokenness. Later, I learned she came from a very dysfunctional home where many forms of abuse abided. She was desperate to be loved and to love. And she was hungry for Jesus—she just didn’t realize what the hunger was yet.

But once she discovered Jesus’s love and decided to follow Him she became a whole new creation—on the inside. On the outside, she looked the same.

Those who didn’t know her story and what dramatic changes she made in her life in such a short time questioned the validity of her faith because of her black clothing. They questioned her love for Jesus because of her piercings. They assumed she was the same girl she was before because of her dark makeup.

But those of us who knew her saw a light in her eyes that wasn’t there before. Where anger hardened her face, joyful smiles now resided. Her brooding silence evaporated into laughter. She was changing before our eyes.

It was like watching a chrysalis waiting for the butterfly to emerge. On the outside, she was still goth. But on the inside, she was a beloved Child of God whom Jesus began to renew from the inside out.

She walked away from the friends who encouraged her past destructive behavior. She quit smoking pot, drinking, and partying. And she ended her long-term relationship with her boyfriend once she learned God’s plan for sex. These were painful decisions for her to make. But she realized they didn’t reflect her new Identity in Christ, and that became more important to her than her past.

If you saw this sweet woman today, she still wears black clothing, dog collars, and combat boots. Her makeup isn’t so dramatic and her expression isn’t so severe, but her appearance and knowledge of that subculture opens up opportunities to share her Jesus-story with these beautiful, lost, and broken people that I couldn’t dream to have.

Beloved, We are told over and over that we never get a second chance to make a good first impression. Though this is true, there’s a hidden danger in jumping to conclusions about a person. What you see on the outside often doesn’t reflect what is on the inside. Making snap decisions can be grievous because they only look at the surface, they don’t look at the heart.

Thankfully, we have a Savior who does.

We have a Savior who looks past the façade and into the heart of who we really are—on the inside where no one else can see. Jesus wants us to come as we are. No masks. No first impressions. Just us. No matter how messed up. No matter how broken. No matter what choices we’ve made in the past. He invites us to come.

And when we give Him everything, He starts reforming us from the inside out—He makes us into a new creation. He takes that brokenness and puts it back together, making us whole. He takes our pain and heals it, leaving behind the scars to bear witness to our testimony. He takes our dreams and reshapes them to be in accordance with His purpose for us.

To others, we may look the same. But to Jesus we’re—

3 thoughts on “Day 6 of 31 Days of Seeing Jesus in Your Daily Life: Built Ford Tough With Chevy Parts”