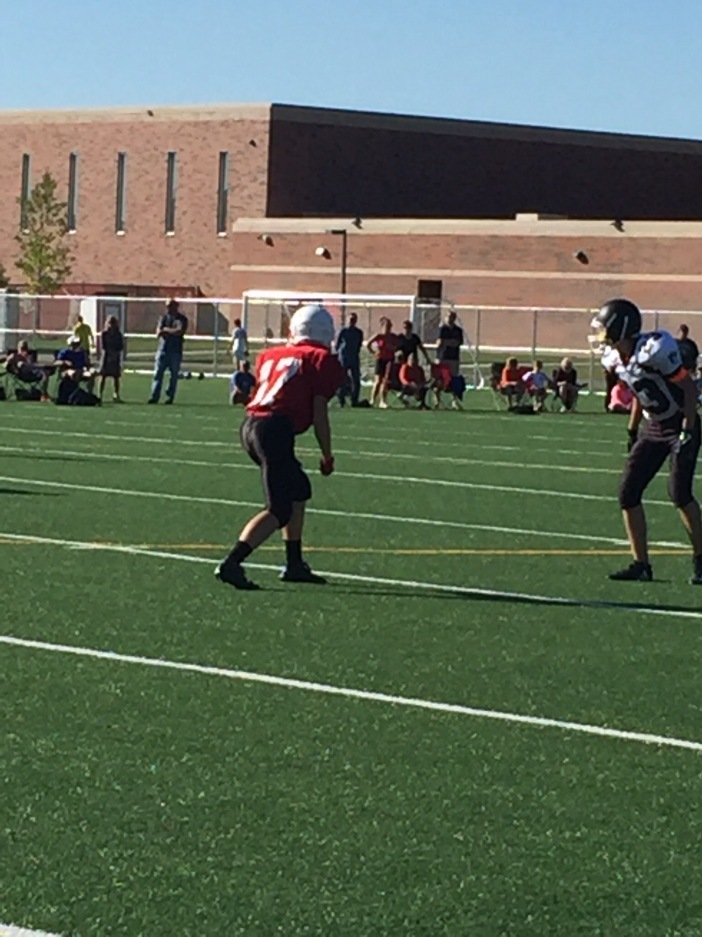 Tyler is a gifted athlete.

All his life he’s been able to excel using the simple formula of combining his familiarity with that sport and his natural talent. Whenever he tries a new sport, he thrives after only a few practices. Granted, techniques and skills need to be refined and improved, but that usually happens seamlessly. Easily. With little effort.

Then he joined wrestling.

The first day Tyler walked to the wrestling room he was at a loss; he knew absolutely nothing about the sport. Oh, he had all kinds of prejudicial assumption swirling around in his head, but no actual knowledge about it. He knew none of the techniques, holds, or rules. He was clueless as to how to win a match.

Yet, there he stood outside the door, strange new shoes on his feet and headgear in his hand.

“What am I doing here? I don’t want to be here. What have I agreed to?”

He was there because his mother (that would be me) encouraged pushed him to be there.

See, Tyler didn’t make the basketball team. (Read more about that here.) After he was cut, he assumed he would shoot hoops with his buddies, participate in a summer camp, and try out again next year.

The problem is, this is a different type of competition than he’s used to—either you make the team or you don’t, thanks for playing. And to close the gap between himself and the boys who made the team he was going to be required to eat, sleep, and breathe basketball. He would need to get onto as many league teams as possible, get extra coaching, and forsake everything else—just in hopes of getting on the team.

Don’t get me wrong; he would go full throttle. He would work hard. He would do well. But soon the sacrifices would mount up, and the cost-benefit ratio would be too far out of balance for a non-guarantee. He would miss sleepovers and hangouts with friends. He would have to neglect other things he loves like fishing and camping. And he would have to skip youth group and boy scout activities.

And considering he likes playing basketball, it’s not his passion.

Eventually—his drive would deflate. He would quit.

Plus, he loves to play football!

Tyler’s switch from soccer to football in 8th grade put him a little behind his peers who’ve been playing for years. But he’s done very well catching up, and therefore has a much better chance of making next year’s football team.

And I’m convinced wrestling will help him get there.

There aren’t many other sports that can match wrestling’s intensity or are better for conditioning.

Though these are all crucial for football and good reasons for me to push him toward wrestling; there was more to it than that.

Before basketball tryouts, I felt God encouraging me to point him in that direction even though it made no sense to me. Tyler’s NEVER shown any interest in wrestling—EVER!…But I’m getting ahead of myself.

The first month of practice was brutal. Despite his years as an athlete, he’d never experienced such intense training before. His everything hurt. He was exhausted. And he was grumpy.

Tyler had no foundation to build on. No crossover from other sports he’s played. Nothing.

He’s not accustomed to starting from ground zero, building a foundation, and THEN finding victory. And his frustration was growing.

Two weeks into the season, Tyler wrestled in his first tournament. He still had no idea what he was doing. But he walked onto the mat for his three matches anyway.

For a competitor like Tyler, this was humbling. But he learned a lot that day. And the encouragement from each of his opponents gave him just enough confidence to keep going.

In the midst of this, Tyler was getting to know his teammates. It didn’t take long for him to learn he is one of the only followers of Jesus on the team. And for a newbie who was already feeling isolated, he now he felt alone.

In short, Tyler was wrestling as much inside as out.

He wanted to quit but didn’t want to be a quitter. He was tired of losing but didn’t know how to win. And he knew I was going to make him fulfill his commitment and stick it out for the whole season.

Can you feel his frustration?

So the night before his next tournament I opened the door for him to vent. And he did.

He spewed his frustrations with the wrestling, losing, and lack of knowledge. He spouted about how sore and tired he was—physically and emotionally. And he lamented over how lost many of his teammates are because they don’t know Jesus.

Everything he said was legitimate and valid. And even though it broke my heart to listen to his pain, I was thankful for his willingness to be open and vulnerable. 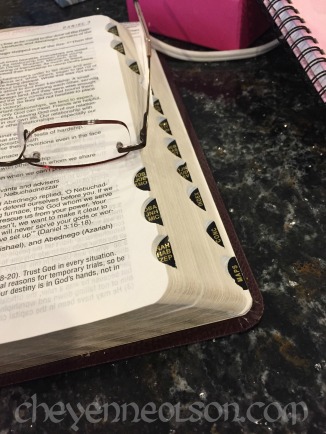 First, I told him that though many of his teammates don’t know Jesus personally and choose to follow Him that gives him a wonderful opportunity to be Jesus-with-skin-on to them. However, he has to be careful not to expect his unsaved teammates to live as Christians, to have a Christian mindset, or to exhibit Christian morals, values, and priorities. That’s not only an unfair expectation, but it will give him a hard heart and make him judgmental. Plus, it’s impossible to care about someone and encourage him/her when you’re being judgemental.

Next, we talked about him choosing to love his teammates like Jesus—with kindness, tenderness, and grace. I encouraged him to study how Jesus treated others and how He ALWAYS led with love and sincerity but never compromised Truth. Then I told him to ask Jesus: to give him His heart for his team, for wisdom on when to speak and when to keep it shut, and the right words to use in the right way when it’s time to talk. And to know how to be a better teammate and friend.

I reminded him we are called to be salt and light to the world around us—but our light is useless unless it’s used to illuminate the darkness, and our salt is pointless if it doesn’t preserve God’s Word. “But not everyone is going to like your light. Some will (and do) tease you for your faith. Get over it. This is an area where you’re going to need to be mentally tough and let it go.”

I also addressed his desire to see a soul harvest, with his team and among his friends. “Tyler, we are called to plant seeds of the gospel (Matthew 13; Mark 4; Luke 8) and to water them with our love, compassion, and prayers. But only God can make them grow (1 Corinthians 3:6-7). Only the Spirit can make them desire to choose Jesus. We don’t know what is happening in the unseen world, keep praying. Keep being a friend.”

Then we talked about attitude.

But I took it a step further. I told Ty for anyone to listen, really listen to what he has to say, he needs to earn their respect.

And that starts with his attitude.

About the workouts, the training, the early morning lifts, the losses, the future wins, everything. They have to know he genuinely cares about them individually and the team as a whole. They need to know he’s committed—win or lose.

But first, he must choose his attitude. He MUST choose to care.

I reminded him wrestling is a sport-family. Teammates bond like few other sports teams do, and often the brotherhood (sisterhood) lasts a lifetime. No, not all the wrestlers will be his friend. Not all of them will like him nor will he like all of them. That’s ok. But as a Christian, he needs to allow God to love them through him regardless of his affinity for them or theirs for him. Who knows, friendships and life-long bonds could develop in places he never thought possible. Don’t close doors prematurely, or assume there’s no door there to begin with.

Plus, And they can still respect him without liking him.

How would he earn their respect?

But it all starts with his attitude. And only he can choose it.

Finally, I encouraged him to give every practice, every training session, every match to Jesus.

To wrestle—win or lose—as though he was wrestling for God and His glory. To offer his time on the mat, weight room, or track as a holy sacrifice and ask God to work through him.

Tyler took everything I had to say to heart. I have no idea what he talked to God about, but the change was immediate! The next day he came out as a whole new wrestler and would have won his first match had it not been for two technical penalties. He lost all his other matches that day, but he was different. Positive. His perspective utterly transformed. Not just to my eyes, but to other’s as well.

And a few weeks later, he got his first win…and his second!

But more important than that, Ty’s attitude change changed him.

He grew significantly in his faith and as a young man. Learning to lead with love and not judgment opened his heart to care for and invest in people like he never had before. He started to look for their value and help bring it out. He started to encourage and build up his teammates and others.

Ty’s attitude change also had a positive impact on his team and opened up the door for several of his teammates to ask questions about his faith, why he believes what he believes, and why his faith is so important to him.

Something else happened when Ty changed his attitude…He fell in love with wrestling.

Just as Tyler’s season was starting to take off and he was winning matches, he got sick with influenza (twice), a sinus infection, and double ear infection. Though these slowed him down and kept him from practice and a few matches, they weren’t enough to make him stop.

That happened when he severely bruised his meniscus in his knee during one of his last tournaments. He was angry. Crushed. And in tears. Not because of the pain, but because of not being able to wrestle. He hated being kept from what he loved.

Plus, he didn’t want to let his team down. His coaches down. Or God down.

I had never seen that side of him before. If he got injured in another sport it was a bummer but not the end of the world. But not this time. This time it crushed his heart and spirit. It drove him crazy not to be on the mat. And he missed it. A lot.

In a few short months, he went from knowing nothing about the sport, resenting the sport, to identifying himself as a wrestler. He went from feeling alone to developing good friendships with his teammates. And he has big goals for next season and beyond. All because he chose to change his attitude.

View all posts by Cheyenne Olson

What I’m reading now (I’m an amazon affiliate. Clicking on this link is FREE for you and provides a commission to support this blog)

There was an error retrieving images from Instagram. An attempt will be remade in a few minutes.

Amazon Affiliate Link: FREE for You and helps support this blog