Do you ever read Scripture and have more questions than answers? 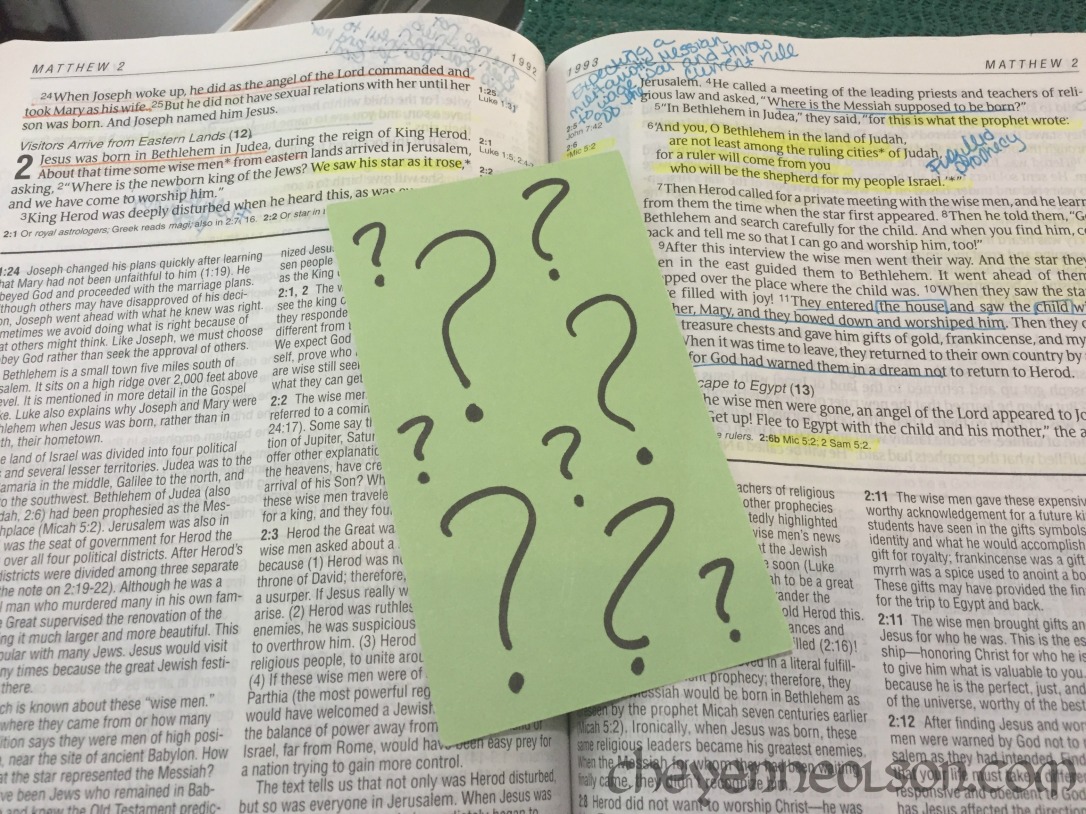 Sometimes, ideally, the answers you seek are found in other parts of Scripture. Other times, if you’re lucky, a Biblical scholar may have spent months going through dusty old tomes of historical and cultural documents and written about what he’s/she’s learned.

Then there are the times like those found in Matthew 2:1-12. After the birth of Jesus, visitors from the East came to see Him. To meet Him. To worship Him.

Jesus was born in Bethlehem in Judea, during the reign of King Herod. About that time some wise men from eastern lands arrived in Jerusalem, asking, “Where is the newborn king of the Jews? We saw his star as it rose, and we have come to worship him.” Matthew 2:1-2, NLT

Okay, stop right there. See what I mean?

C’mon, give a girl some details! Build the intrigue, the suspense!

Remember Matt’s primary audience was Jewish, and he wrote to present evidence that Jesus Christ was their long-awaited Messiah. (Read about the Intro to Matt here)

He leads off with Christ’s lineage, in which he included some who were considered to be unmentionables. Then he exposes a “scandalous pregnancy” and subsequent marriage. Now he drops That name, the name that struck terror in any God-fearing Jew’s heart—Herod the Great.

Oh yes, his original readers knew precisely who this man was. He made the Pharoah at the time of the Israelites’ escape look like a pussycat. As soon as their eyes fell on his name you could hear the vaudeville organ—dun-dun-dun-duuuuuun!

Though he was a Jew, he didn’t have their best interests at heart as he ruled. He had a lust for power and did whatever he could to hold onto it. He wasn’t above killing family members or his children if he felt the least bit threatened by them.

So as these out-of-town guests arrived in his court seeking the whereabouts of this child, the tension was there. Palatable. Tangible. Constricting.

This was history for the original Jewish reader. They knew the outcome of this seemingly benign event. Thus, their tension was at an all-time high as they read. Many remembered and others heard tell of the massive massacre of little boys, newborn to two-years of age, after Herod went into a rage once he realized these visitors didn’t report back to where they had seen the child. Fear consumed him as did the hand of Satan in his own quest to destroy the child. Herod feared the child would grow up and take his throne, his power, and eventually his life. Satan knew He would destroy his.

This event not only set the stage for Joseph’s dream to take off for Egypt; it also fulfilled three separate prophesies regarding the Jewish Messiah—which added to the three surrounding his lineage and conception provided a substantial foundation for his argument of Jesus being their Messiah.

But what about us Gentiles? Does this passage have anything to say about us?

Beloved, I’m not sure how you filled in the missing detail of this story.

Regardless, I encourage you at this moment to kneel before your King. Confess and repent. Surrender your everything to Him, for His use and glory—time talent, finances, expertise, skills, etc. Then, stand. Go and be the light the guides others to Him, just as that star guided those men so many centuries ago.